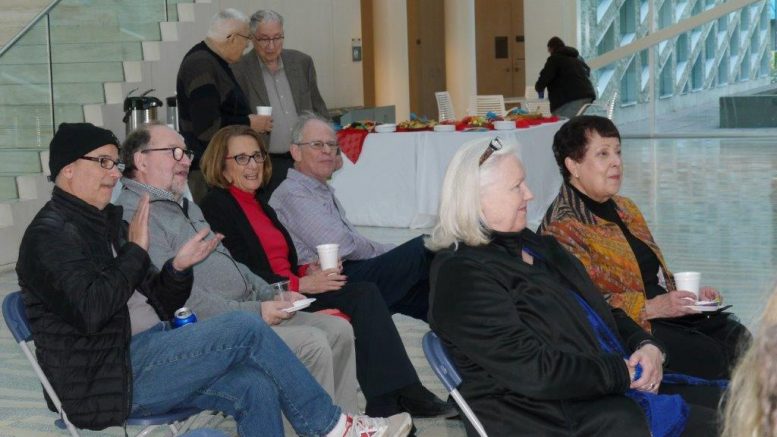 Members of the community attending the opening of the "Canadian Jewish Experience" exhibit at Edmonton City Hall.

(Edmonton) – The Jewish Federation of Edmonton, is co-hosting the exhibit of “Canadian Jewish Experience” (CJE) at Edmonton City Hall for the month of October, along with the Jewish Archives and Historical Society of Edmonton and Northern Alberta. The CJE is a special exhibit created to honour Canada on the occasion of the 150th anniversary of Confederation in 2017.

The theme of CJE is a celebration of Canadian Jewish contributions to modern Canada, in honour the 150th anniversary of the country. The CJE exhibit is not a ‘history of Canadian Jews.’ Instead, its focus is on Canada and how Jews have helped make this country what it is today. It was prepared by a small group of people in Ottawa to coincide with Canada 150. The author of the exhibit is historian Sandra Morton Weizman, formerly of Edmonton, now of Calgary. The original exhibit opened in Ottawa in early April and, rather than transporting the panels across the country and limiting their accessibility, replicas were produced so that a total of 10 major cities will be able to display the works, entitled “The Canadian Jewish Experience: A Tribute to Canada 150.”

In Edmonton, the exhibit opened first at the Beth Israel Synagogue on July 1, before being moved to the Beth Shalom for Doors Open Edmonton, then to Heritage Days in August, to the Edmonton Talmud Torah for the month of September, and now to the atrium of City Hall today, where it will remain on display for the month. It is expected that a more permanent home will be found afterwards.

In addition to work on the display, Weizman was also heavily involved in putting together a complementary website, which allowed her to include more detail on the Jewish history in this country. Those who are interested can check it out at www.cje2017.com.

In terms of the history of Jews in Edmonton, Alberta, the City itself was first incorporated as a town in 1892. At that time, there were about 700 permanent residents. Founded on the banks of the North Saskatchewan River on the site of the former Hudson’s Bay Company’s Fort Edmonton, it soon began to attract a growing populace.

Abraham and Rebecca Cristall, Edmonton’s first Jews, arrived in 1893. Their children, George and Rose, were the first Jewish children born in Edmonton. Abe became a successful businessman, and helped to bring more Jews over from his native Bessarabia. By 1901, there were 17 Jewish citizens in Edmonton. In 1904, Edmonton became incorporated as a city, and in 1905, Alberta officially became a province and the CN Railway arrived. Today, the Jewish population of Edmonton is around 5000 people.

There has always been a strong tradition of civic involvement in the Edmonton Jewish Community, with members serving on the boards and executives of many local arts, cultural, educational and fundraising organizations, as well as in the Judiciary, including Associate Chief Justice Tevie Miller, the first Jew to hold that high office in the Province of Alberta. Bora Laskin, Chief Justice of the Supreme Court of Canada, was also a born and bred Edmontonian.

Jews have been involved in every aspect of Civic life in Edmonton, from the founding of the Citadel theatre, Canada’s largest regional theatre by Joe Shoctor, to Jews who have served on the Boards of the Edmonton Symphony, Opera, Art Gallery and Concert Foundation, like Dianne and Irving Kipnes, to Rexall billionaire Daryl Katz, who bought the Edmonton Oilers hockey team in 2008, and now owns the Edmonton Oil Kings and Cracker Cats baseball teams as well.

Jewish businessmen Moe Lieberman, Henry Singer and Joe Shoctor were instrumental in the founding of the Edmonton Eskimos CFL franchise. Broadcasting legend Cecil “Tiger” Goldstick, son of Edmonton’s first Rabbi was a trainer with the early sports teams in Edmonton before becoming a broadcaster and founder of Sports Central, a charity which provides under-privileged kids in the city with sports equipment. A park is named in his honour in the East End of the City, and his picture adorns the Edmonton Sports Hall of Fame on the City’s main square.

The two hosting organizations for this exhibit have also been around for quite a while. In 1954, the Edmonton Jewish Community Council was formed as an umbrella organization for the community, and served as such for 28 years. On September 20, 1982, the Community Council merged with Edmonton United Jewish Appeal to become today’s Jewish Federation of Edmonton.

The Jewish Archives and Historical Society of Edmonton and Northern Alberta or(JAHSENA) was founded in 1996 to preserve and promote the history of this vibrant Jewish Community.

Don’t miss this opportunity to view this special exhibit, on display now at Edmonton City Hall until October 31, 2017.

Debby Shoctor is the CEO of the Jewish Federation of Edmonton.