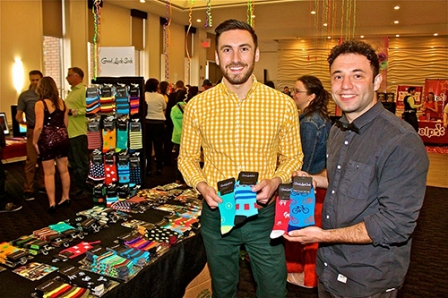 Even though the Edmonton Oilers only had an 11.5% chance of winning the NHL Draft Lottery, and getting the opportunity to draft elite prospect Connor McDavid, they did so – to the shock of many. It seems the team had luck on their side, luck provided by Talmud Torah Alumni Yuri Gerchekov, and Leo Shifrin.

The two own the Edmonton based company Good Luck Sock, and provide patterned and coloured socks to customers all over the world, apparently including the new Chief Executive Officer of the Oilers Entertainment Group, Bob Nicholson.

Bill Scott was the Oilers representative at the Draft Lottery and when asked if he had any good luck charms he responded: “Bob gave me a loonie, and a pair of socks. They’re actually called ‘Good Luck Socks’ and they had Canadian flags on them.”

And did Scott wear the socks? “I wore the socks. Absolutely.”

Terry Jones of the Edmonton Sun has already declared that the lucky red socks, the Oilers card from the announcement, and the loonie belong in the Hockey Hall of Fame.

For Leo Shifrin, a die-hard Oilers fan, the moment was surreal. “When I saw the picture of my Good Luck Socks next to the Oilers logo golden ticket I literally shivered with excitement! Did the socks power the Oilers to get lucky? Who can say, but you’re welcome Oilers fans!” Leo joked.

When asked if he’ll be releasing a special Connor McDavid sock Leo chuckled and responded, “no comment.”