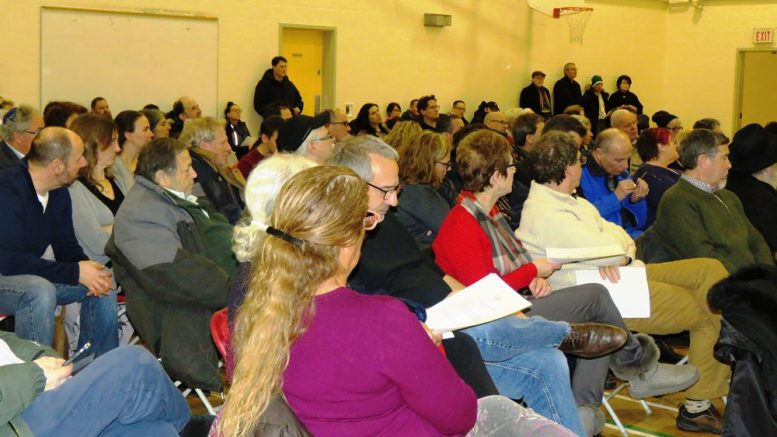 On Feb. 11, 2019, Talmud Torah Society members voted against a motion to give its board the power to enter into an agreement to lease a portion of it lands and building to a new Edmonton JCC.

(EJNews) – A heated meeting was held by the Edmonton Talmud Torah Society on February 11, 2019 to decide whether or not to give its board of directors the power to enter into an agreement to lease a portion of its lands and building to a new Jewish Community Centre.

What seemingly could have been a vote of confidence for the board became a laundry list of grievances about the process and the substance of the negotiations.

In the end, the vote on the motion was 68 in favour and 56 opposed, which was short of the 2/3 majority (83 votes) required by the Talmud Torah Society Bylaws. Therefore, the Society will not be proceeding with a lease negotiation at this time. According to TT President Michael Sadovnick, there is hope that differences can be resolved to keep the process moving forward.

The rhetoric at the meeting by Jewish Federation spokespeople was that a no vote would mean that the process is over. However, that may have just been a gambit to sway voters to vote yes. When the old JCC property was sold several years ago, the proceeds were set aside to be used for the construction of a new facility. A thorough planning and research process has been going on for the past few years so it seems unlikely that this vote could derail the entire process.

The meeting demonstrated the lively discourse and polarized viewpoints that have become commonplace whenever the topic of a Jewish Community Centre in Edmonton is discussed. One hundred and twenty-four people attended the meeting representing a cross section of current Talmud Torah parents, past parents and dedicated community members who care about the future of the community.

It was chaired by Sadovnick who gave a brief explanation of the reason for the meeting – to revote on a motion that was presented at the December 10 TTS meeting which was held at the end of the Federation AGM. An insufficient number of TTS members stayed for the vote making the revote necessary. Earlier that evening Federation members voted to give their board to power to enter into lease negotiations with TTS – provided an independent $1 million capital fundraising campaign was completed by November 30, 2019.

Sadovnick read the motion that was to be put before the TTS and opened the floor for questions and comments. Before moving into the discussion portion of the meeting, Sadovnick told the members in attendance that he was taking off his “facilitator hat” to share his own personal views on the motion.

He said, “First, I want to be clear that I support building a JCC and while the design is not optimal, it will hopefully work for the community. I believe that the Talmud Torah community is willing to support the JCC, but the potential cost to Talmud Torah and the financial risks are too great for the benefits we are receiving in return.”

Sadovnick continued, “For this reason, I am not supporting the passing of the motion and here’s why: The Federation has made it clear to me that they require the following terms in the agreement. While we have tried to negotiate these terms they have made it clear that these are not negotiable for them – with the first term  being a 300-year lease. I do not believe it is appropriate for the Talmud Torah to agree to something for this length of time. However, what is more important is what this 300-year term causes.”

“The Federation has made it clear that should Talmud Torah move to a new location, the school must build a replacement JCC or if it chooses, or needs to move without the JCC that the JCC will receive the value of their building plus 20 percent of the value of the entire Talmud Torah land. JCC will have no requirement to provide funds for a new JCC other than their initial investment,” explained Sadovnick.

“Also, the JCC will not be required to do any significant investment on their building for the next 300 years. And if their building deteriorates, it will be a liability to Talmud Torah and ultimately a burden on those families who are relying on the school at that time.

“I believe that this is completely unreasonable and worst it could put the Talmud Torah’s long-term future at risk. Should Talmud Torah need to move in the next 300 years, a very likely situation, it would first have to allocate funds to a JCC before a new property can be acquired and built.

“This may result in a JCC being funded and Talmud Torah not having enough money to build a new school.”

“On the benefits for Talmud Torah,” added Sadovnick, “we would receive access to a lunch room, a kitchen and solidify us as the centre of the community. In return the JCC will lease our land for $1 per year, have access to our gym outside of school hours and Talmud Torah will demolish two classrooms to allow them to connect to the building. I believe this on its own is a reasonable deal.

“However, I cannot support a deal that may put a JCC’s interests ahead of the community Jewish Day School that has been around for over 110 years and is, in my mind, one of the most important institutions in the city. What will be more important to the community in the future, a potentially 100-year-old JCC building that is minimally maintained or a financially sound Talmud Torah? I strongly believe the latter.

A number of Federation board members addressed Sadovnick’s comments by reiterating that although the design of the centre had not been finalized, the framework for the negotiations was solid – a 99-year lease with two options to renew and the 20% payout by TTS should the two part ways – with little if any room for negotiations.

There was also a mixed response to Sadovnick’s comments at the meeting. Some felt he was out of line to speak out because he was chairing the meeting while others thought his personal perspective on the matter was an important opinion to hear.

In the end, the vote was held and although the majority of the TTS members voted in favour of proceeding, the numbers did not meet the 66% majority needed to pass.

What will happen next is anyone’s guess. Likely the two sides will need a cooling off period to regroup before deciding to resume negotiations, or take the Talmud Torah site off the table, look for an alternate site that will require a larger capital campaign or do something else with the funds.

Talmud Torah President Sadovnick indicated that the TTS is open to further negotiations.