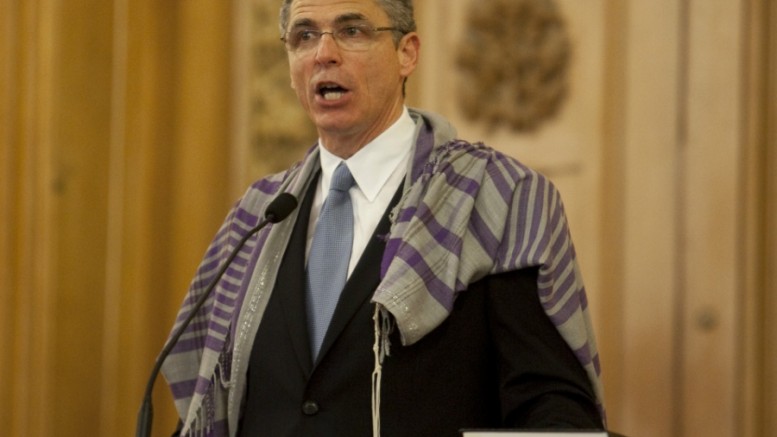 By Debby Waldman and Ann Goldblatt

Edmonton’s Jewish community is invited to be part of Temple Beth Ora’s Triple Simcha, coming up on Saturday evening, March 28.

In addition to the kickoff to commemorating double chai — 36 years as Edmonton’s Reform Jewish congregation — TBO will unveil the first stage of its in-progress renovations, and welcome special guest, Rabbi Rick Jacobs, president of the entire Union for Reform Judaism (URJ).

The Union of Reform Judaism (formerly the Union of American Hebrew Congregations, or UAHC) is the synagogue arm of the Reform movement in North America, and has more than 900 member congregations. His visit marks the first of any URJ (or UAHC) president to TBO.

Rabbi Jacobs is on a western swing of Canada, as the Reform congregations in Vancouver and Calgary are also celebrating significant anniversaries.  “This is a rare opportunity to have the president of the entire movement come to this city,” says TBO Board Member Ann Goldblatt, who is helping organize the event. “Temple Beth Ora has an important role to play in Edmonton’s Jewish community and the community at large, and we’re welcoming everyone to be part of the celebration.”

The Triple Simcha will include a Havdallah service, featuring music by TBO’s singing friends, Chavurat HaShir, led by Maita Silver, and an address by Rabbi Jacobs. There will also be an opportunity to test your knowledge of TBO’s history, which began in 1979 when three Edmonton families decided they wanted a Reform Jewish presence in the city.

By the early 1980s, the congregation had swelled to 25 families and was meeting regularly at the Jewish Community Centre. There were more than 50 children in the Beit Sefer, and services were conducted by either student rabbis from Hebrew Union College, the Reform Jewish Seminary, or lay leaders.

Steve Friedenthal, now TBO’s administrative assistant, was among the first to join, along with his wife, Cheryl. “We had no sense at all it would last this long,” he recalls. “But I remember feeling that no matter how things went, this is my congregation, and I have ownership of it. I still feel that way.”

What has changed, he says, is that TBO is no longer on the periphery, as it was when it was first established and the reception from the city’s Jewish community was mixed.  “I think we’re more confident,” he says. “We’re moving forward.”

With the exception of short periods following the departure of two rabbis during the past twenty years, TBO has had full-time rabbis since the mid-1990s. The congregation, which now numbers 100 families, moved into the Chevra Kadisha in 2008.