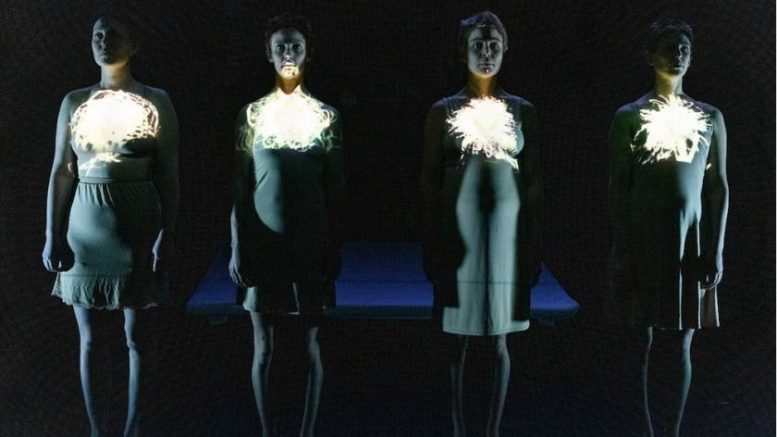 The Cardiac Shadow is playing now at the Northern Light Theatre, until February 2.

(EJNews) – Both visually mesmerizing and profoundly chilling, The Cardiac Shadow by Clay McLeod Chapman, provides viewers with an innovative approach to Holocaust narration.  Currently playing at Edmonton’s Northern Light Theatre, this merging of lyrical modern movement, and five separative monologues, is an avant-garde representation of four women’s experiences enduring medical experimentation after being taken from Ravensbruck, a women’s concentration camp ninety miles from Berlin that operated from 1939 to 1945.

“We need only remember the four girls who were taken from the Ravensbruck concentration camp and made to lie naked with the frozen and all but dead Jews who survived Dr. Rascher’s tank of ice water,” writes Dr. Eric A. Cohen.  Audience members, upon entering the studio theatre, are immediately confronted by five foreboding strands of barbed wire separating the house and performers.  The rest of the stage appears utterly devoid of signs of life – but only at first glance. This crafted starkness is purposefully deceptive.  As the disembodied voice of SS Second Lieutenant Dr. Sigmund Rascher begins a lengthy monologue justifying and even glorifying his unethical human experimentation during WWII, a blank white screen, easily overlooked, comes to life with images of a small child frolicking in the snow.  The child is the sinister doctor’s daughter.  This montage of unsettling innocence contains the only depiction of Jewish content within the piece.  The child unpacks everyday items from an appropriated suitcase: spectacles, a hat, common trinkets.  Following this, she finds objects that have no meaning to her, but that are deeply significant and sacred: a tallit and a menorah.  Rascher, voiced by a the never seen Vance Avery, chillingly compares one of the four women to his own daughter, while simultaneously dehumanizing her as a specimen for scientific observation.

The once barren stage transforms as four scantily clad forms slink mournfully through gaps in the barbed wire and collapse the projection screen to function as a large bed.

Chapman’s play is both drama and an interpretive movement dance piece.  Three of the four on stage performers are from the local Good Women Dance Collective.  The first of the historically fictionalized women to tell her story is Mary, who reminisces about discovering a solitary mole on the back of her lover’s neck.  This character, voiced by University of Alberta BFA graduate Nadien Chu, and physicalized by dancer and choreographer Alida Kendell, is beautifully encircled by a pool of light coming through a tall window.  Lighting designer Beth Dart, in a demonstration of profound artistic skill, accomplishes tremendous expression through extreme minimalism.  The window, which Dart places impossibly high up on the stage right wall, presents Mary as imprisoned, but with the taunting of unattainable escape.  Kendell’s rhythmic and abstracted movements are framed within Dart’s skillfully constructed sunlight cast through the window, illustrating the divide between her memory and captivity.

The second story is that of Sarah, voiced by Elisa Benzer and physicalized by Alison Kause.  Sarah’s is an exceedingly painful story of hunger and desperation that meaningfully causes audience members great discomfort to listen to.  Kause’s dance seems less a solo performance, and more a pa de deux performed with a wooden spoon.  The character narrates how she posed as a nurse in order to receive a choice work assignment and expresses her loathing and disgust for the sick and dying who dribble a precious droplet of soup down their chins as they are spoon fed by starving prisoners.  Along with the spoon that Kause drops, throws, retrieves, and clambers for across the stage, tension builds as Sarah describes how she surreptitiously consumes the soup of those too ill to eat.  She is both grateful for and ashamed of the thin layer of fat she maintains over her ribs.

Chapman’s third monologue is that of Anna, voiced by Rachel Bowron and danced by Kate Stashko.  Here, Chapman showcases his poetic talents coupled with his effective and impactful narration.  Anna’s is the story of her relationship with music.  Her contentious love of playing the cello is juxtaposed with her vivid memory of losing her virginity to an exceptionally emaciated man while being forced to work in a brothel.  Chapman both elegantly and disturbingly composes a text that conjures excruciating images of musical instruments with grotesque distorted human forms, in a way that both captivate and haunts the viewer’s imagination.

The final monologue is Judith’s.  She is voiced by Megan Dart and physically performed by Ainsley Hillyard.  Judith’s story also takes the form of a memory.  She takes momentary refuge in the recollection of a vacation she took with her sisters before the war and sitting on the shore of the Baltic Sea.  Her warm reminiscing exists in stirring disharmony with her description of lying unclothed with the hypothermic bodies of Rascher’s male test subjects.  Not only do Chapman’s words effectively achieve a disjointed comparison, but the choreography of Hillyard’s whimsical then suddenly jarring movements, further illustrates this critical juxtaposition.

The final image of the play is a stunning tribute to the talents of Beth Dart – no more need be said.  Significant praise should also be bestowed on Katerina Beatty of Loud Whisper Productions, for her multimedia representation of Rascher’s daughter, and to the truly inspired sound design of Dave Clarke.  The modern minimalism of The Cardiac Shadow’s production team is nothing short of masterful brilliance.

The narrative itself did leave the viewer craving more in the way of historical contextualization.  Although the historical events themselves were clearly not the focus of Chapman’s work, a great deal of the piece’s significance could easily be lost for audience members not extensively familiar with the details and events of the Holocaust despite a brief synopsis in the program.

The Cardiac Shadow is less a play and more of an interpretive modern movement piece set to monologue.  It deals with themes of the Holocaust but does so without a direct Jewish focus.  Instead, Chapman concentrates on women’s stories without any overt referencing of national or cultural identities.  However, with International Holocaust Remembrance Day being observed on January 27 by the global community, Chapman’s The Cardiac Shadow is a timely semi-fictional representation of an immensely depraved and dark chapter of unethical scientific research.  It is a remarkable work of avant-garde theatre.