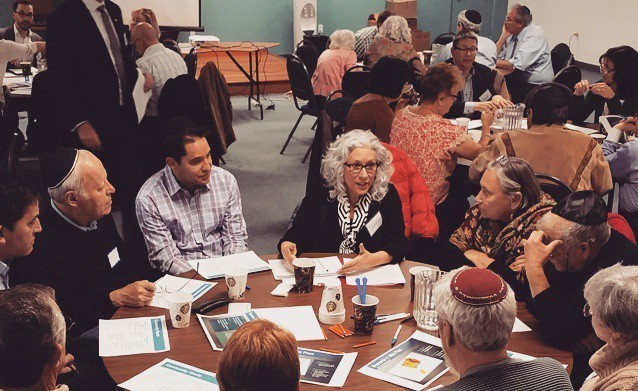 Three Town Hall meetings were held this month to collect community input on a new JCC in Edmonton. Photo courtesy of Jewish Federation of Edmonton

(April 30) The Community Facility Utilization (CFU) Committee of the Jewish Federation of Edmonton held Town Hall meetings this month to discuss options for the construction of a new Jewish Community Centre to be built in the west end of Edmonton.

There were three meetings held in three different locations – Beth Shalom, Talmud Torah and Beth Israel.  The meetings are said to be the culmination of the latest work of the committee in a lengthy process to plan for the present and future needs  of our community. 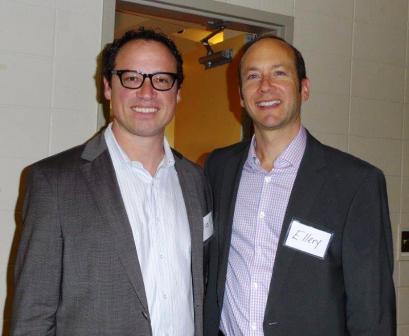 He gave a brief summary of the work of the Committee from the beginning, and then offered  two possible site options for a new Edmonton JCC: the Beth Israel site and the Talmud Torah site. He explained that a third option – at Beit Horim (attached to Beth Shalom)  – has been eliminated.  He said that $4.8 million was realized from the sale of the old JCC site and that those monies are intact, have been invested and are earmarked for a new JCC.

CFUC Chair Clive Oshry explained that each site was the subject of a feasibility study conducted by two different architects, Stantec and Manasc-Isaac. These architects were selected because they were the original architects for the existing facilities.  Two unique options were prepared for each site, one attached and one detached, and these are the options that were presented as the ones that Federation is considering. 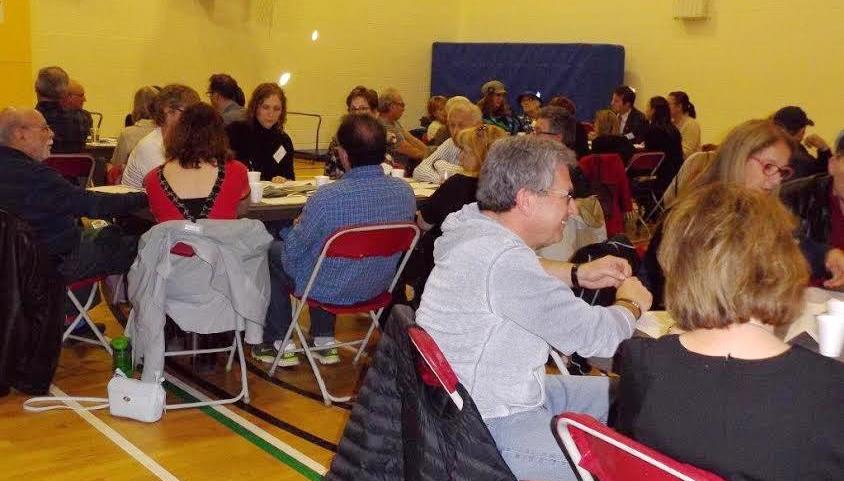 It was suggested that a facility at Talmud Torah might be 10,000 square feet  (a 5000 square foot structure with two levels) and a structure at Beth Israel might be 5000 square feet all on one level – whether attached or detached. But the attendees were told that the actual size could be adjusted (bigger or smaller) and that the details of what goes in the building would not be discussed at these Town Hall meetings. Nor would issues about governance or financial details. These matters, it was explained would be left for further meetings.

The large group broke into several small facilitated discussion groups. It was explained that the purpose of the small group sessions was to collect feedback from attendees as to which option is preferable from a community perspective.  The topics of discussion were: tangible and intangible needs, opportunities and challenges of each scenario.

The information gleaned from these sessions will be gathered into a report by an unbiased consultant, Chris Lavin of Solved, and presented to the CFU Committee for consideration. The committee will review this information, as well as all of the information it has collected over the last two years, and make a recommendation to the Board of the Jewish Federation of Edmonton as to which is the preferred site and configuration for a JCC on that site. If the Board votes to accept that recommendation, then the work of this committee will be done. 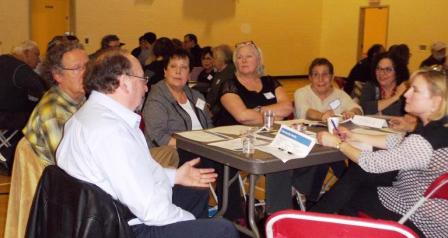 The large group broke into small groups so everyone could participate

The Board will then strike a new JCC Planning and Building Committee, tasked with coming up with detailed plans for building a new JCC on that site. That plan, if accepted by the Federation Board, will be presented at a meeting to which all Federation members will be invited, for approval.

“No money will be spent on actually building a new JCC on that site until Federation has obtained that approval,” concluded Lew.  “There is still much work to be done before we reach that point, including hiring architects and a builder, obtaining proper zoning, and negotiating with partners who are already on the site or who have interests in the site, obtaining permits, doing soil sampling, etc.”

Before breaking into the smaller groups Oshry stressed that inclusivity is important and the  “process of building a community should be community building.” He also said that if people were unable to attend a town hall meeting they should still feel welcome to submit their input.

The following statements are responses from a number of Town Hall attendees to the question from EJN staff – what was your impression of the Town Hall Meeting you attended.

“In my Town Hall meeting there were only two people under 30 (and one is on the JFED board) and there were very few people there who were under 35 (and even under 40). I hope there is a way to engage this demographic.

“I found the meeting to be very informative. I really enjoy being part of the process and helping improve Jewish life in Edmonton.  I’m glad we are going to get a new West End JCC, near most of the Jewish families.

“The presentation was interesting but the list of items for discussion seemed superficial. We need more information about financials, programming and governance to help us make informed decisions.

“A couple of people in my group said that office space for all organizations was really important. How much space would be needed for that?  How many offices are needed and would that eat up most of the 5000 square feet?

“I was at the Yom Ha’atzmaut Party at BI last week and I think that the Town Hall meetings are the first steps to having more great events like that one. Kol Hakavod to the organizers of the meetings and the other volunteers. I was happy to be involved and engaged.

“I don’t think that Beth Israel could ever be non-denominational and I think the JCC should be open on Saturdays.

“It was written on an overhead that the site of the detached facility for the Beth Israel location might not be possible because of proximity to the ravine. We shouldn’t consider it if it isn’t actually  an option.

“I thought Clive and Ellery did a great job presenting and it was wonderful to see so many people come out to talk about the community.

“I just hope JFed/CFUC listens this time and take efficient action.  Federation has already done surveys (2006/2007 building committee) and parlor meetings, so I’m nervous that there is no accountability or timeline to hold them to.   Federation has been consulting since 2006 – my concern is that the process will continue to take baby steps and drag out.

“I was really impressed with the process – everyone had a chance to speak and give their opinion.

“If 4.8 mill is not enough then there needs to be a fundraising campaign so we can afford a larger centre. There is no room at BI for a larger facility but there is at TT.

“I think it was a good inclusionary exercise but it seems like the powers that be can just do whatever they want now.

“I was excited to hear from the WEJCC group because I wanted to learn more about their plan – wasn’t it for a much bigger building? I was disappointed that they weren’t involved.

“I think it should be at the TT and it needs to be detached and autonomous. A JCC is a relaxed place and a school needs to maintain a professional level of decorum.

“This seemed like a fruitless exercise. Mark my words, nothing will happen.

“It was so nice to see such a lively discussion focused on the future of our Jewish community. I’m excited to see what happens next.

“Some of the items we were told to discuss seemed identical and others were program ideas that we were told not to discuss, but at the same time that if we had any new ideas now was the time to suggest them.  Then for some reason, we were asked to rank them. It was confusing what we could and couldn’t talk about. I wondered why we were being directed to discuss these particular items.

“The meeting was really well organized and operated very smoothly.”

Feel free to post your comments about the Town Hall meetings and the process for a new Jewish Community Centre in the comments section below.

Be the first to comment on "Town Hall Meetings wrap up: What did you think?"