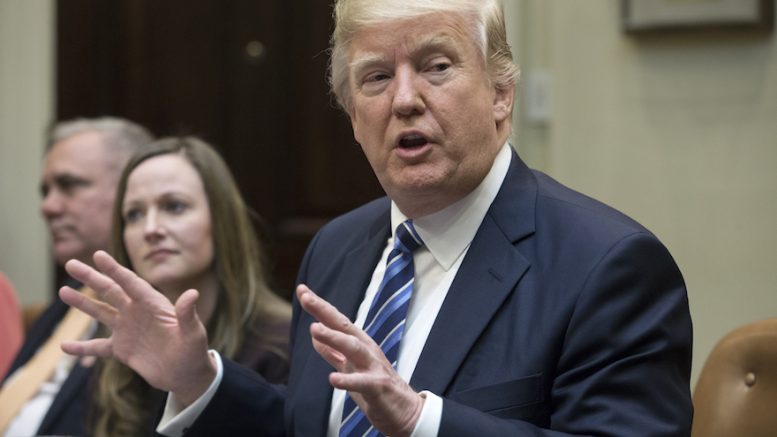 US President Donald Trump attending a meeting on healthcare in the White House, in Washington, D.C., March 13, 2017. (Michael Reynolds-Pool/Getty Images)

WASHINGTON (JTA) — President Donald Trump will visit the Western Wall unaccompanied by Israeli leaders in order to emphasize the overarching message of his overseas tour: unifying the three Abrahamic religions against the common threat of terrorism.

“No Israeli leaders will join President Trump at the Western Wall,” H.R. McMaster, Trump’s national security adviser, said Tuesday at a briefing for reporters ahead of Trump’s Middle Eastern and European tour next week.

“The president’s intention is to visit these religious sites, to highlight the need for unity among these three major religions in confronting a grave threat to these civilizations and unity in embracing an agenda of tolerance,” he said.

Trump is scheduled to visit Saudi Arabia, Bethlehem in the Palestinian Authority and the Vatican, the seat of the Catholic Church. His visit to the Western Wall will be the first by a sitting U.S. president; only presidential candidates have visited the holy site.

U.S. officials planning the trip reportedly rejected an offer by Israeli Prime Minister Benjamin Netanyahu to accompany Trump, saying Monday that the Western Wall was in the West Bank. The White House later said the officials’ statements, which sparked outrage among Israelis and U.S. Jewish groups, did not reflect U.S. policy.

However, pressed on whether the Trump administration saw the Western Wall as being in Israel, McMaster demurred, saying it was a “policy decision.”

Congress recognized Jerusalem as Israel’s capital in 1995, but presidents for decades have treated the status of Jerusalem as unresolved. Trump pledged while campaigning to recognize the city as the capital, but as president has retreated from the promise.

Removed from a schedule distributed to reporters earlier this week by Israel’s government was a planned visit by Trump to Masada. Instead he will visit The Israel Museum. McMaster did not explain the change.

In Saudi Arabia, Trump will address a gathering of representatives of 50 Muslim nations in what McMaster said would be an “inspiring yet direct speech on the need to confront radical ideology and the president’s hopes for a peaceful vision of Islam.”