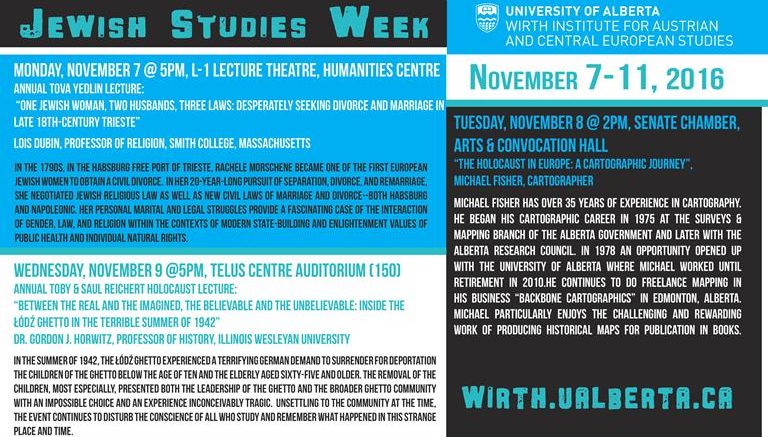 (EJNews) – The Wirth Institute for Austrian and Central European Studies at the University of Alberta is hosting an exciting line-up of programming for their Jewish Studies Week on November 7-11, 2016. 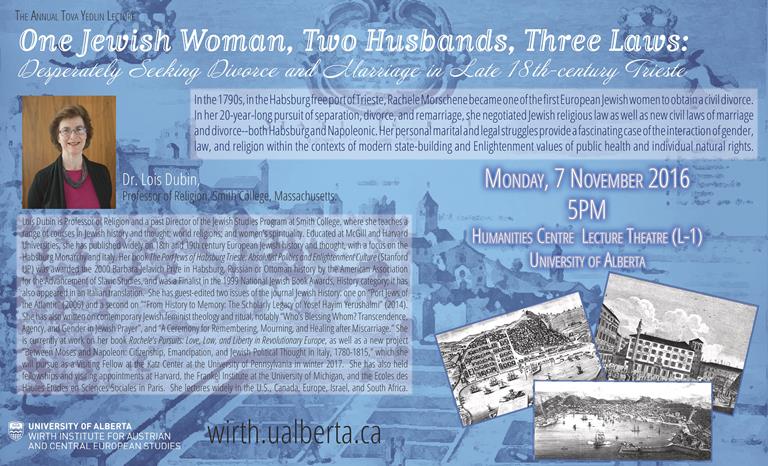 “In the 1790s, in the Habsburg free port of Trieste, Rachele Morschene became one of the first European Jewish women to obtain a civil divorce,” explains Professor Dubin. “In her 20-year-long pursuit of separation, divorce, and remarriage, she negotiated Jewish religious law as well as new civil laws of marriage and divorce — both Habsburg and Napoleonic. Her personal marital and legal struggles provide a fascinating case of the interaction of gender, law, and religion within the contexts of modern state-building and Enlightenment values of public health and individual natural rights.”

Lois Dubin is Professor of Religion and a past Director of the Jewish Studies Program at Smith College, where she teaches a range of courses in Jewish history and thought; world religions; and women’s spirituality. Educated at McGill and Harvard Universities, she has published widely on 18th and 19th century European Jewish history and thought, with a focus on the Habsburg Monarchy and Italy.

Her book “The Port Jews of Habsburg Trieste: Absolutist Politics and Enlightenment Culture” (Stanford UP) was awarded the 2000 Barbara Jelavich Prize in Habsburg, Russian or Ottoman history by the American Association for the Advancement of Slavic Studies, and was a Finalist in the 1999 National Jewish Book Awards, History category; it has also appeared in an Italian translation.

Professor Dubin has guest-edited two issues of the journal Jewish History: one on “Port Jews of the Atlantic” (2006) and a second one “From History to Memory: The Scholarly Legacy of Yosef Hayim Yerushalmi” (2014). She has also written on contemporary Jewish feminist theology and ritual, notably “Who’s Blessing Whom? Transcendence, Agency, and Gender in Jewish Prayer”, and “A Ceremony for Remembering, Mourning, and Healing after Miscarriage.”

She is currently at work on her book “Rachele’s Pursuits: Love, Law, and Liberty in Revolutionary Europe,” as well as a new project “Between Moses and Napoleon: Citizenship, Emancipation, and Jewish Political Thought in Italy, 1780-1815,” which she will pursue as a Visiting Fellow at the Katz Center at the University of Pennsylvania in winter 2017. She has also held fellowships and visiting appointments at Harvard, the Frankel Institute at the University of Michigan, and the Ecoles des Hautes Etudes en Sciences Sociales in Paris. She lectures widely in the U.S., Canada, Europe, Israel, and South Africa.

On Tuesday, November 8 from 2 – 3 pm in the Senate Chamber, Arts & Convocation Hall a lecture will be held by Cartographer Michael Fisher. The topic is “The Holocaust in Europe: A cartographic Journey.”

Michael Fisher has over 35 years of experience in cartography. He began his cartographic career in 1975 at the Surveys & Mapping Branch of the Alberta Government and later with the Alberta Research Council. In 1978 an opportunity opened up with the University of Alberta where Michael worked until retirement in 2010. He continues to do freelance mapping in his business “BackBone Cartographics” in Edmonton. Michael particularly enjoys the challenging and rewarding work of producing historical maps for publication in books.

On Wednesday, November 9 from 5 – 7 pm at Telus Centre Auditorium the Annual Toby & Saul Reichert Holocaust Lecture will be delivered by Dr. Gordon J. Horwitz, Professor of History, Illinois Wesleyan University. This topic is: “Between the Real and the Imagined, the Believable and the Unbelievable: Inside the Łódź Ghetto in the Terrible Summer of 1942.” 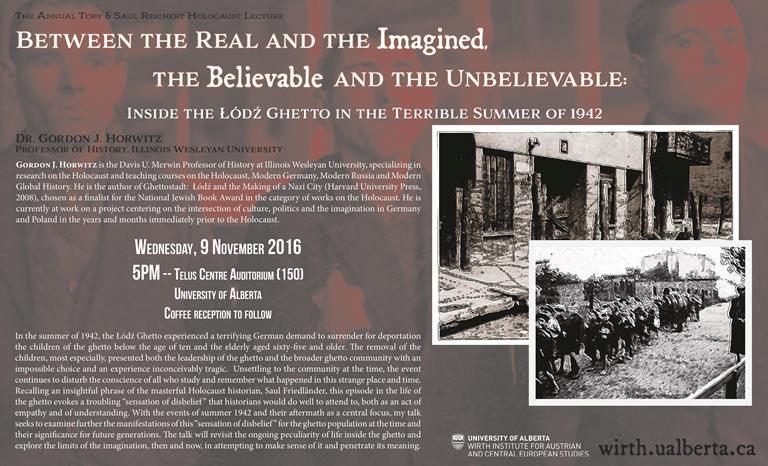 In the summer of 1942, the Łódź Ghetto experienced a terrifying German demand to surrender for deportation the children of the ghetto below the age of ten and the elderly aged sixty-five and older. The removal of the children, most especially presented both the leadership of the ghetto and the broader ghetto community with an impossible choice and an experience inconceivably tragic. Unsettling to the community at the time, the event continues to disturb the conscience of all who study and remember what happened in this strange place and time.

Recalling an insightful phrase of the masterful Holocaust historian, Saul Friedländer, this episode in the life of the ghetto evokes a troubling “sensation of disbelief” that historians would do well to attend to, both as an act of empathy and of understanding.

“With the events of summer 1942 and their aftermath as a central focus, my talk seeks to examine further the manifestations of this “sensation of disbelief” for the ghetto population at the time and their significance for future generations,” explains Dr. Horwitz. “The talk will revisit the ongoing peculiarity of life inside the ghetto and explore the limits of the imagination, then and now, in attempting to make sense of it and penetrate its meaning.”

Gordon J. Horwitz is the Davis U. Merwin Professor of History at Illinois Wesleyan University, specializing in research on the Holocaust and teaching courses on the Holocaust, Modern Germany, Modern Russia and Modern Global History. He is the author of “Ghettostadt: Łódź and the Making of a Nazi City” (Harvard University Press, 2008), chosen as a finalist for the National Jewish Book Award in the category of works on the Holocaust. He is currently at work on a project centering on the intersection of culture, politics and the imagination in Germany and Poland in the years and months immediately prior to the Holocaust.

Don’t miss this rare opportunity to attend these lectures. For more information visit wirth.ualberta.ca. The Wirth Institute is also pleased to announce that a searchable index for their Rudolf Vrba Holocaust Reading Room is now available online.

Be the first to comment on "Wirth Institute announces Jewish Studies Week at University of Alberta: November 7 – 11"