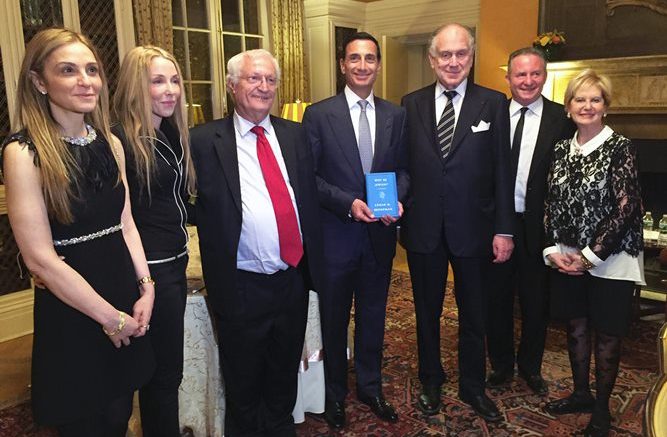 May 20, 2016 (New York, NY) – As anti-Semitism and anti-Israel movements boil in Europe, leaders of the global Jewish community paused to reflect on and honor the heroes of Soviet and Russian Jewry – who supported an endangered community through the darkest hours of Communism.  Ronald S. Lauder, President of the World Jewish Congress; Malcom Hoenlein, Executive Vice Chairman of the Conference of Presidents of Major American Jewish Organizations; and Matthew Bronfman, Chair of the Limmud FSU (former Soviet Union) organization gathered at the Harvard Club in New York City on May 19, 2016, in honor of the late Edgar M. Bronfman and the pillars of the Soviet Jewry Movement.

Mr. Lauder commended the Soviet champions who devoted their time to fight for Jewish rights in Russia. Lauder stated that, as Jews continue to be attacked around the world for their religion, it is clear that anti-Semitic beliefs remain prevalent in cities around the world. Mr. Lauder urged the guests to be courageous as the Jews in the Soviet Union once were, and to take a stance against the anti-Semitic threats found on college campuses in the United States, and in cities around Europe and abroad. He emphasized that the community’s greatest challenge in years, the choosing of a new UN Secretary General who is a true crusader for peace and a fair player to Israel, is imminent.

We are proud to honor the heroes of the Soviet Jewry Movement for their strength, bravery, and unyielding commitment to fighting for Jewish rights in Russia. On a personal level, I pay tribute to Edward Bronfman, my predecessor as President of the World Jewish Congress, for his life’s work as an advocate for the Jewish people,” said Ronald S. Lauder, President of the World Jewish Congress.

“Edgar’s bravery and determination to better the lives of the Jewish people during the Soviet era remind us of the challenges Jews around the world continue to face, as global anti-Semitism continues to rise. It is a challenge we continue to face, and why we as a global community must ensure that the next Secretary General of the United Nations is an impartial and fair partner to Israel, leaving anti-Israel and anti-Semitic beliefs behind.”

“As I travel, people come up to me wherever I go and start talking about my father and the great impact he had on the Jewish people,” said Limmud FSU International Steering Committee Chair Matthew Bronfman, Edgar’s son. “My father was dedicated to the Jewish people – and he was a great leader and an inspiration. He fought like crazy for Jewish justice. He was a giant in many ways – and in many ways he was just my dad.”

The event, which paid tribute to former president of the World Jewish Congress, the late Edgar M. Bronfman, honored his dedication and life’s work on behalf of the Jewish people.  Mr. Bronfman, who served from 1981 to 2007, is remembered for his diplomacy with the Soviet Union, which resulted in the legitimizing of the Hebrew language in Russia, and growth towards allowing Soviet Jews to practice their religion and immigrate to Israel, initiatives that the World Jewish Congress continues to support.

Be the first to comment on "World Jewish leaders honour Edgar M. Bronfman z’l and other heroes of Russian Jewry"