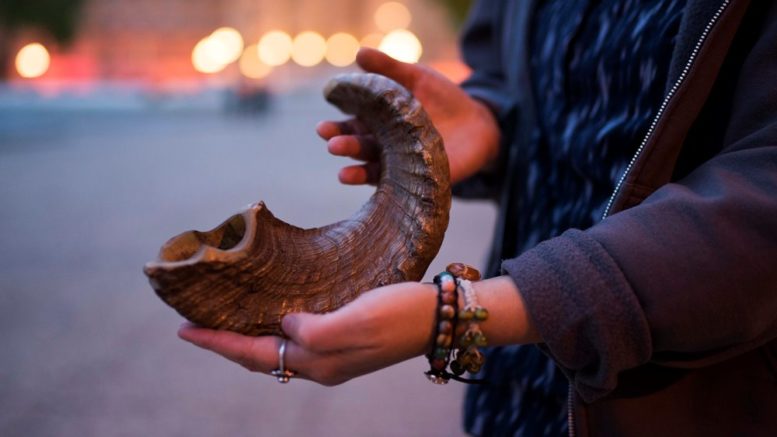 September 22, 2019, Edmonton, AB (Treaty 6 Territory) – On the evening of September 22, around three hundred people from dozens of different faith communities came together for a candlelight climate vigil, taking part in the largest ever global week of climate action happening from September 20-27th.

Recognizing the urgency of the climate crisis and the duty of faith communities to take a stand, people of all ages and backgrounds gathered to show support and raise awareness for the youth and Indigenous-led climate strike happening in Edmonton on September 27th.

“Faith communities, mosques, synagogues, temples and churches––we all have a responsibility to take a stand on the defining moral issue of our time: the climate crisis,” said Rabbi Gila Caine from Temple Beth Ora Synagogue. “I hope people of all faiths join us this Friday September 27 at noon at Churchill Square as we march in support of climate action.”

A Candlelight vigil in support of climate action was held on September 22 as a prelude to a noon climate strike that is taking place at noon on September 27 at Churchill Square in downtown Edmonton.

Early on in the vigil, two known local neo-nazis and members of The Clann (formerly Soldiers of Odin), Ryan Dean and Mike Kirkland, stood in the back of the crowd, heckelling the speakers and mocking the Indigenous Elder and Knowledge Keeper leading the prayer. Event organizers engaged non-violently, holding up a black banner to obscure the men.

“It’s disheartening that these fascist individuals came out but unfortunately not surprising,” stated Gabrielle Gelderman, event organizer and MC, “white supremacist groups in the city are becoming increasingly active and dangerous. That they came out to this event like this just goes to show that we can’t address the climate crisis without also tackling white supremacy and colonialism––these issues are deeply intertwined.”

This past Friday September 20, marked the largest ever day of global climate mobilization with an estimated 4 million people around the world taking part. Next Friday, hundreds of thousands of people across Canada are expected to strike from work and school. In Edmonton event attendees are meeting at 12:00 pm to march from Churchill Square to the Legislature Grounds. Details about the strike can be found at edmontonclimatestrike.org.

Other details from the vigil can be found on the Facebook event here.

Be the first to comment on "YEG interfaith groups gather at candle light vigil and urge members to attend climate action march on Sept. 27"