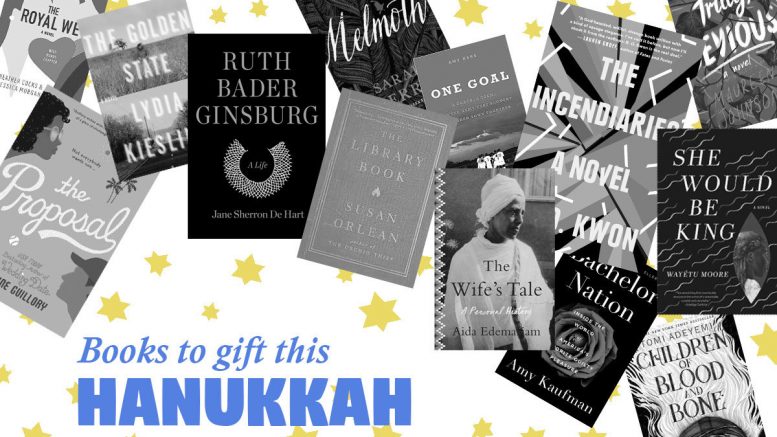 (Kveller via JTA) — A book is the best present — even if it is a present to yourself. That’s why they are the perfect gift for Hanukkah. We’ve found 13 books released in 2018 for every type of person in your life. And because we could, they’re all female authors.

We’ve broken it down into five categories:

* For book lovers, the ones who check out five or more books at a time at the library and are probably a member of more than one book club;

* For nonfiction aficionados, who can always be found reading a biography or memoir or history book;

* For adventurous readers, the ones willing to try that new collection of feminist horror short stories or retellings of Greek myths;

* For those who unabashedly love things called “guilty pleasures,” which is a long title but essentially for people who don’t care that they love “The Bachelor”; and

* For teen adjacent readers, for parents who want to read what their teens are reading and because honestly, young adult fiction is great.

Kiesling tells the story of Daphne, a new mom whose husband is unable to get back to the United States after a visa snafu. Frustrated with everything, she takes her 16-month-old daughter on a spontaneous road trip to her grandparents’ home. It’s a story about the realities of motherhood — but also about a desire for purpose, and freedom, and California, and more. As Kiesling explains, “Motherhood is something that intensely grounds one in a particular moment, while also posing interesting questions about morality and agency and personal history — all good things for a novel!”

Cults + violence + love + mystery + extremism + so much more = R. O. Kwon’s debut novel.  The New York Times headlined its review “When First Love Is as Lethal as Religious Extremism,” and wrote, “The novel is about extremism, yes, but it’s for anyone who’s ever been captivated by another; for anyone who has been on either side of a relationship that clearly has a subject and object of obsession; for anyone who’s had a brush with faith, or who’s been fully bathed in its teachings; for anyone afraid of his or her own power.” Essentially, the book feels particularly fitting for this moment.

A biography of RBG is maybe the best Hanukkah book gift: It’s not necessarily something you would buy for yourself, but it’s something you would love to own. There’s so much to learn about in the biography — everything from the Jewish values that have guided her career to her legal victories to her unique parenting style.

The premise of Orlean’s latest book is the 1986 Los Angeles Public Library fire that destroyed thousands of books and has remained unsolved. But it’s really so much more than that: It’s how public libraries emerged in America, how they’ve adapted to the modern age (a k a the internet), and how they deal with the challenges of today (namely the homeless). Orlean weaves together these many threads — it is not to be missed.

The Wife’s Tale: A Personal History

In exquisite detail, Edemariam tells the story of her grandmother, Yetemegnu, who was born in Gondar, Ethiopia, in 1915. It also recounts the birth of modern Ethiopia: Yetemengu endured the death of some of her children, the imprisonment of her husband, the invasion of Ethiopia, and so much more. As Edemariam explained, “History is lived by ordinary people in just as much vividness.”

One Goal: A Coach, A Team and the Game That Brought a Divided Town Together

For Those Into Something New and Different

She Would Be King

Moore tells the story of Liberia’s formation using magical realism and three powerful (fictional) characters. There’s Norman, the son of a Jamaican slave and British colonizer, who can disappear. There’s Gbessa, branded a witch and exiled from her West African tribe. And there’s June Dey, raised on a Virginia plantation until he discovers his superhuman strength and escapes. Their stories start out separately but eventually they cross paths. It takes a bit to get into (there’s also a fourth narrator – the wind), but once you do, you won’t be able to put it down.

Enjoy being legitimately scared by novels? Like, truly terrified? If yes, you must read “Melmoth.” Perry creates a fictional monster who is based off the New Testament woman who denied that Jesus was resurrected; her failure to acknowledge what she witnessed damned her. But this is not a Christian book. The stories deal with very real, very human sins of characters who are haunted by Melmoth for what they have done wrong — one story centers around the Holocaust and another deals with the current refugee crisis.

For Those Who Reject the Term “Guilty Pleasure”

Public proposals are kind of the worst (see: that guy proposing to his girlfriend during mile 16 of the New York Marathon). That sentiment forms the premise of Guillory’s latest romance. The protagonist, Nikole, is proposed to by her actor boyfriend at a Dodgers game. She rejects him — they’ve only been dating for five months! — and tries to escape. Two strangers (Carlos, a very cute doctor, and his sister) help her make a quick exit. Carlos and Nikole are immediately attracted to each other, and, well, you can guess where this story goes …

Bachelor Nation: Inside the World of America’s Favorite Guilty Pleasure

Kaufman dives into the dirty secrets of “The Bachelor” franchise and it is not to be missed! In an interview with our sister site, Alma, Kaufman explains that the most surprising thing she learned was that in the show’s early days, the producers would track the female contestants’ menstrual cycles. She writes: “By monitoring the cast’s periods, the producer said, the crew knew when the ideal moments were to interview them so that they’d be especially emotional or suffering from PMS. Savage!”

By Heather Cocks and Jessica Morgan

OK, this wasn’t released in 2018, but 2018 is the year many Americans became deeply obsessed with the royals (hello, Meghan Markle! Hello, Meghan Markle’s Jewish BFF!), so this is the perfect gift for your royal-loving-friend. “The Royal We” — written by the bloggers behind the popular fashion and royal site Go Fug Yourself — is a fictionalization of the romance between Prince William and Kate Middleton. An American falls in love with British royalty while studying abroad. This sounds basic, but trust us, it’s super well-written and deeply addictive. You will stay up all night reading.

Children of Blood and Bone

Adeyemi was only 24 when her debut garnered critical acclaim and “one of the biggest YA debut novel publishing deals ever.” And the hype is seriously worth it. The book is essentially Harry Potter meets West African mythology meets Black Lives Matter. (Adeyemi is being called the next J.K. Rowling, no joke.) It’s the first in a planned trilogy. Adeyemi’s goal? “Write a story that’s so good and so black that everyone’s going to have to read it — even if they’re racist.”

For fans of Nancy Drew and Agatha Christie, Johnson’s “Truly Devious” (also the first in a new series) is about teenager Stevie Bell, who starts at a school for gifted kids in Vermont. Stevie sets out to solve a cold case (the 1930s abduction and probable murder of the headmaster’s wife and daughter). It’s a fun, fast read. As Entertainment Weekly writes, “The supporting cast provides the kind of diverse representation that YA readers crave.”

(Emily Burack is an editorial assistant at Kveller.)